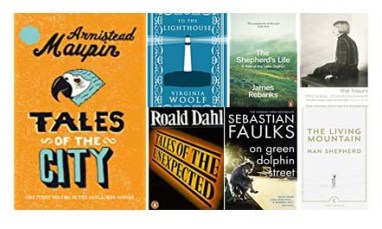 This post is a companion piece to a post I have published on my other blog, Leaping Life, participating in the Six Degrees of Separation book-link meme.

I love making unexpected connections between random ideas. Creating a playlist for my six degrees book choices allows me to prolong the linking fun! So here we go.

Tales of the City is set in San Francisco, so what else could I choose but this beautiful version of the Tony Bennett classic:

Next up is Tales of the Unexpected. Again, there can be only one choice. This iconic opening sequence to the TV series which sprang out of the books used to both terrify and intrigue me!

Now we come to The Shepherd’s Life. What a brilliant excuse to include some of my favourite music by Beethoven – the fifth movement of Symphony no 6, the “Pastoral” represents the shepherd’s song of thanksgiving, where the peasants celebrate the passing of a storm:

The Scottish setting for The Living Mountain opened up a huge range of choice, given the plethora of brilliant Scottish bands past and present. In fact, I could not decide which track to pick, so have opted instead to include the singing of Flower of Scotland, our unofficial anthem. This brings a lump to the throat whenever it is played at Scotland’s home rugby matches, especially the a capella singing of the second verse.

For To the Lighthouse, set on the wonderful Isle of Skye, I give you one of the best ‘island’ related tracks ever:

The Hours was made into a brilliant film with a stellar cast. It is one of those movies where sound and visuals harmomise absolutely perfectly. Here is an excerpt from Philip Glass’s stunning soundtrack:

And finally, there can be only one track for my book choice of On Green Dolphin Street:

10 thoughts on “Six degrees of listening while reading: Tales of the City is just the start….”

This site uses Akismet to reduce spam. Learn how your comment data is processed.