To start us off in the ‘Hs’, we have, ladies and gentlemen, one of the greatest composers of all time.

Perhaps he is best known for his oratorio Messiah. This includes the famous Hallelujah Chorus. A fabulous choral work and one in which I have participated many times – it is an incredible feat of composition and ‘an amazing sing’. There is also scope for a bit of a giggle in rehersals when you get to the part that goes ‘oh we like sheep…’. There is an all important comma which makes a big difference to the phrase and must at all costs be vocalised – ‘oh we, like sheep…’. Love those little choral jokes. 🙂

Needless to say, I don’t have this work in my iTunes listing. But I do have some other brilliant Handel compositions.

The first I want to share with you is the Anthem for the Foundling Hospital. This is music similar to that of Messiah – story telling accompanied by beautiful, light and lyrical baroque orchestral music. And the final movement? The Hallelujah Chorus again. This institution was in fact a children’s home and Handel allowed Messiah to be performed there regularly to raise funds. He eventually donated a full score and was elected a govenor.

Next we have two of Handel’s other famous works – Music for the Royal Fireworks and The Water Music. 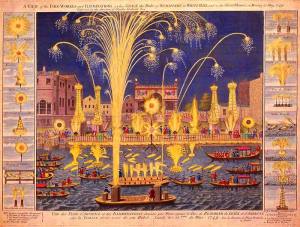 The Music for the Royal Fireworks is composed as a wind band suite and was intended to celebrate the end of the War of the Austrian Succession and the signing of the Treaty of Aix-la-Chapelle in 1748. There is a bit more information about this work in the Wiki entry. More importantly, however, is how it sounds – majestic; triumphant; crisp; bright. I should add that there is an extra special link for me and Mr Tracks to the penultimate movement – La Rejouissance. It was this music which accompanied us as we walked down the aisle as newly-weds.

The Water Music is a collection of three suites – in F major, D major and G major. These are delightful compositions, with many of the individual movements becoming well known in their own right. I have on my iPhone the F major Suite and within just this work, the Air and the second Hornpipe can be picked out as instantly recogniseable. But the work as a whole is light, breezy and a total delight.

Handel’s repertoire is vast and I could go on for pages. But I am going to close this post with a LeapingTracks special – something which I had in my list and knew nothing about until now. It is the beautiful Alceste. This is an hour or so of ‘incidental music’ written for a play which has long since been lost. Both the vocal and orchestral parts combine to create diaphanous poems. Petite fours with earl grey tea. Swallows and swifts delighting on the wing.

My default switch, when I think of baroque music, is always set to heavy and somber. I really must get it re-wired.

This site uses Akismet to reduce spam. Learn how your comment data is processed.